US Solar Under 7% Of Global Demand 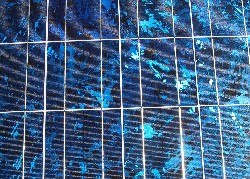 Leaving money on the table, the US could be missing out on a huge global market.

In the US, the solar business is booming, according to the Solar Energy Industries Association. Their recent US Solar Market Insight report illustrates that the solar market has grown an average 69% annually over the past decade, with a 55% boost in the industry for 2010 over 2009. The first half of the year alone showed that 339 MW of grid-connected photovoltaics (PV) were installed in the US, with estimates for the second half of the year to outpace the first. 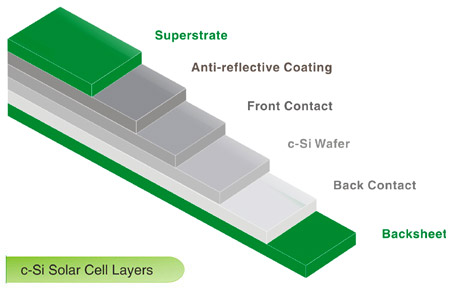 Nevertheless, the US solar market is still only a small slice of the global solar pie, accounting for only 6.5% of global PV demand behind Germany, Italy, and Japan. And with the upcoming expiration of federal solar subsidies, many are asking how solar will survive in 2011 and beyond. For some, the answer is in an area that the US typically shines: technology innovation. Since solar PV currently has efficiencies below 20%, the big break is likely to come with products that get "more bang for the buck".

Solar panels, like the diagram on the right, are created from layers of materials that are sprayed or laminated together. Efficiency--how well the panels transfer sunlight into usable electrons--is determined by the characteristics of the layers. In a recent webinar, "Can Module Cost Reductions Keep Pace with Subsidy Cuts Heading into 2011?"offered by Lux Research, Senior Analyst Ted Sullivan, explained several important trends that could indicate a sunny future for the US solar industry:

Other developments in manufacturing, such as nanotechnologies that increase the surface area for applying materials by creating tiny indentations, along with new materials are hoped to be the future. In the long run, a solar panels with efficiencies above 50% would be a game changer for US worldwide solar competitiveness.